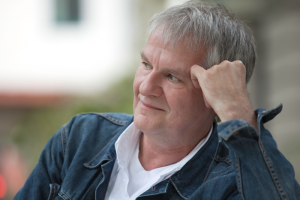 Reinhard Goebel is the founder of the Ensemble Musica Antiqua Cologne, and has been leading it for over 33 years. Today he is a highly sought-after conductor and he strives to pass on his extensive knowledge of historically informed performance to modern symphony and chamber orchestras.

Bearing in mind the anachronism of “conducting” music, which was originally coordinated by the basso continuo playing bandmaster and the violin concert master, Reinhard Goebel develops an extensive self-dependance of the orchestra in contrast to the centralized direction of a conductor in his rehearsals.

In January 2009, Reinhard Goebel became the first guest conductor of the Bavarian Chamber Philharmonics. He also conducted further well-known chamber orchestras, e.g. in Munich, Vienna and Zurich, as well as numerous ensembles with original instruments, such as the Helsinki Baroque Orchestra.

Furthermore, Reinhard Goebel is frequently engaged in new productions at famous opera houses, such as Haendel’s “Xerxes” at the Royal Opera of Copenhagen, Johann Christian Bach’s “Amadis de Gaule” and “Temistoclé” at the National Theatre in Mannheim, as well as with a Monteverdi cycle at the Lower Saxon State Theatre of Hannover.

In January 2013, Goebel performed all six Brandenburg Concertos of J.S. Bach with the Sibelius Academy in Helsinki. In March he gave guest performances with the two major orchestras in Dresden, the Dresden Philharmonics and the Saxon State Band. In April, he gave his debut with the Sydney Symphony with four concerts in the Sydney Opera House with such great success, that he was invited back for 2015. In summer 2013, Goebel was a guest at various festivals, i.e. he opened the International Festival at Herrenchiemsee and once again conducted the Orchestra di Padova e del Veneto at the Festival di Musica die Portogruaro. In October he gave his debut with the Berlin Philharmonics with three concerts.

Reinhard Goebel’s special interest in the German music of Bach’s time, that already inspired his work with the Musica Antiqua Cologne, but also the literature of the pre-classical and classical period will determine his future projects. The basis for his “baroque” and “classical” work is his extensive knowledge of the theoretical sources, most of all the instrumental schools, as well as his enormous repertoire and his spiritedness in trying out new things.

Born in 1952 in Siegen, Reinhard Goebel was a violin student of Franzjoseph Maier, Eduard Melkus, Marie Leonhardt and Saschko Gawriloff. Being especially interested in the historical and philological interests in music, he was able to deepen his knowledge through his musical studies at the University of Cologne. He received further impulses through Christoph Wolff, the doyen of the Bach research.

With the Ensemble Musica Antiqua Cologne, which was founded in 1973 and received an exclusive contract with the archive production of the German Grammophone Society in 1978, Reinhard Goebel distinguished himself as one of the main exponents in the “early music scene”, especially as unchallenged authority in the area of German baroque music. His recordings with the Ensemble Musica Antiqua Cologne are unparalleled, for which he was honoured internationally with numerous prizes and awards – e.g. the “Diapason d’Or” for his CD “Mozart in Paris” in 2008, and again for his newly edited recording of “Le Parnasse Francais” in 2010.

Rainhard Goebel is always eager to pass on his knowledge to the young generation in the framework of courses of the orchestra academy of the Berlin Philharmonics. In autumn 2010, he became professor for historically informed performance at the Mozarteum in Salzburg.