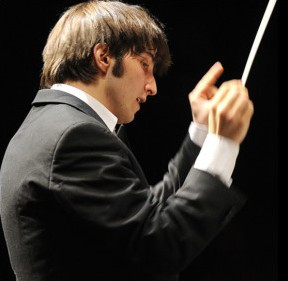 The Hamburger Abendblatt reported a “breathtaking sensation” and “perhaps the most exciting contribution to the Hamburg Mahler Anniversary celebrations”. The Frankfurter Allgemeine Zeitung devoted a whole page to Yoel Gamzou headed: “Unshakeable, radical, uncompromising – portrait of a possessed genius”. Although superlatives should normally be taken with a pinch of salt, two things are indisputable: the 27-year-old Israeli-American Berlin-based conductor Yoel Gamzou has an exceptional talent and he follows his convictions uncompromisingly, constantly exploring and evolving – always following his instinct. Born to an artistic family, Yoel Gamzou grew up in New York, London and Tel Aviv and started playing the cello at the age of four. It was the discovery of Mahler’s music when he was 7 that led him to eventually dedicate himself to conducting when he was 12. Gamzou’s teachers included Winston Dan Vogel and Piero Bellugi. He later travelled to Italy in order to meet his greatest idol: after numerous attempts, he was granted five minutes with Carlo Maria Giulini, with whom he ended up working intensively for two years until the maestro’s death, being his last student. In 2006 Gamzou founded the International Mahler Orchestra, becoming its artistic director and principal conductor. The IMO, comprising of hand-picked members from over 25 countries, aims to explore a different approach to orchestral playing and follows a democratic “ethos” in its activities. Furthermore, it is very committed to developing and revising the traditional concert format and reaching a new and diverse audience for classical music.

In 2007, 19-year-old Yoel Gamzou was awarded the Special Prize of the Bamberg Symphony Orchestra’s International Gustav Mahler Conducting Competition, but declined all resulting guest conducting invitations in order to give himself time for further development and evolution. In 2010 Yoel Gamzou achieved international recognition when his completion of Mahler’s unfinished Tenth Symphony (realisation and elaboration of the sketches) was published by Schott Music. The premiere in Berlin as well as the concert-tour which followed in 2011, with Gamzou conducting his International Mahler Orchestra, were highly acclaimed by Mahler experts, the press and the audience. In 2011, he stepped in at short notice to conduct Mahler’s Ninth Symphony with the Kassel State Orchestra. This debut was greatly acclaimed by the orchestra and the audience and led to an immediate reinvitation as well as to an immediate appointment as Principal Guest Conductor of the orchestra. Since the beginning of the 2012/13 season, Yoel Gamzou is serving as 1st Kapellmeister and Vice Music Director (Stellvertretender Generalmusikdirektor) of the Kassel State Theatre, where he made an acclaimed debut conducting a new production of Fidelio. Just two months after he took up his post, his contract was renewed until 2014 and in autumn 2013 expanded for the 2014/15 season. In 2013/14 he was highly praised by the critics and the audience for his new productions of Rigoletto and Tosca as well as for leading four symphony concert programs, including a much acclaimed performance of Wilhelm Furtwänglers Second Symphony.

Yoel Gamzou has worked with orchestras such as the Israel Philharmonic, the Bamberg Symphony, the Mozarteum Orchestra Salzburg, the Hamburg Symphony and the German Radio Philharmonic. His position in Kassel currently serves as a continuous base for selected guest conducting activities. Future engagements include the Stuttgart and Belgrade Philharmonics and the Philharmonia Orchestra London.

In February 2012, Gamzou won the Berenberg Culture Prize (Hamburg) and in March 2013 he was honoured with the prestigious “Princess Margriet Award” of the European Cultural Foundation.