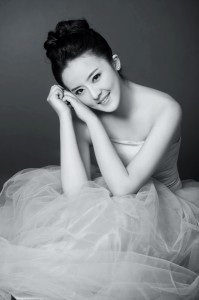 Jieni Wan was born in Germany on February 6, 1995. At the age of four, she received her first piano lessons and moved to China with her parents three years later.  At the age of eleven, she was admitted to the Academy of Music in Shanghai and began her professional training in piano under the guidance of the famous Chinese professor Li Minduo. Two years later, she continued her studies at the Middle School of the Central Conservatory in Beijing. In June 2010, Jieni passed the entrance exam at the University of Music and Performing Arts in Munich with excellent marks and intensified her piano studies under Professor Gitti Pirner, before joining Professor Antti Siirala’s class in October 2013. Jieni has already received many prizes: she obtained her first award at the age of five in Ingolstadt, Germany, and won the first prize at Munich’s youth and children’s competition at Steinwayhaus in the following year. She also won several first prizes at Jugend Musiziert (Germany’s most prestigious music competition for youths) and at the 7th Munich International Piano Panel in 2007. In the same year she received an award for special achievement in art and music in Shanghai, as well as second prize at the international music and art competition for young people in the piano category. In 2008, she received first prize at the national Golden Sunflower Cup in the category Piano, followed by the award for best student majoring in piano at the Beijing Central Conservatory in 2009. In July 2010 she won first prize at the Third Kawai Asia Piano Competition and obtained the first prize at the national competition Jugend Musiziert in June 2011