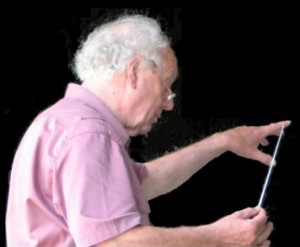 Ulrich Weder was born in Bremen and studied in Detmold, Salzburg and finally in Rome. He received his first theatre experiences in Essen and Bonn, before he started working at the German Opera in Berlin. Afterwards, he was the chief conductor of the State Theatre at the Gaertnerplatz in Munich for several years, and later on general music director in Bremerhaven. He toured various cities in Germany and abroad in his role as opera and concert conductor. From 1972, he also began his work as instructor. He directed the conductor class, the orchestra and the opera school at the Richard-Strauss-Conservatory in Munich until 1999. Starting from 1999, he directed the Munich Oratio Choires for nine years. Since 1993, he was the regular conductor of the Music Association of Gauting.

His desire to pass on his professional experience of the communicative power of making music together to the next generation was his motive for working with the “Ensemble Interculturel”, with which he gave successful concerts in Munich, Italy, Luxembourg and France from 2008 to 2009.

In deepest sorrow, we have to report the unexpected and sudden death of our conductor Ulrich Weder on 17 November 2012. Ulrich Weder conducted the Neue Philharmonie from 2008 to 2009, and also in October 2012. We were able to experience and value him as a highly professional musicians, who was able to fill all musicians with enthusiasm with his warm and patient manner. The Neue Philharmonie München was able to grow immensely under his guidance, and we will think of him in respect and gratefulness.