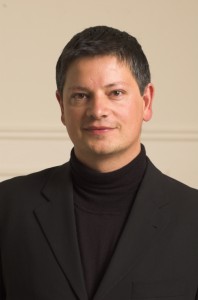 Thomas Gropper, who was Born in Braunlage (Harz), attended the Academy for Music and Theatre in Munich for opera and concert vocal studies with Markus Goritzki. He received further inspiration in oratio singing from Adalbert Kraus and Hanns-Martin Schneidt, as well as in lied singing from Helmut Deutsch. After his studies, he worked with Dietrich Fischer-Dieskau and Josef Metternich. His focus lies on the oratio area, where he has covered all the important bass and baritone parts stretching from Monteverdi and Schütz over Bach, Haendel, Haydn, Mendelssohn, Brahms to Elgar, Orff and Britten, a lot of which were recorded on radio and CD. However, his emphasis lies on the oratios and cantatas of Johann Sebastian Bach. Gropper sang, amongst others, with the Symphony Orchestra of the BR, the Munich Philharmonics, the Munich Bach-Choir an the Munich Motet-Choir, the Georgian Chamber Orchestra Ingolstadt, the Symphony Orchestras of Munich and Berlin, the Heinrich-Schütz-Ensemble Munich and the Baroque-Ensemble L’arpa festante and La banda under conductors such as Fabio Luisi, Hanns-Marin Schneidt, Martyn Brabbins, Hayko Siemens, Wolfang Kelber, Roderich Kreile, Roman Emilius, Christian Kabitz, Ralf Otto and Siegfried Heinrich. During these projects, he was a frequent guest at the Bach Week Ansbach, the European Weeks Passau, the Music Summer Chorin, the Hersfelder Festival and the Lake Constance Festival. The highlights of the next season are Orff’s “Carmina Burana” with the Munich Motet-Choir and the Philharmonic Orchestra of Stuttgard, amongst others in the Philharmonie München, the Matthäuspassion of Bach with the Bach-Choir of Mainz and a premiere in the Framework of the “musica viva” project of the BR with the Symphony Orchestra of the Bavarian Rundfunk.

Thomas Gropper is also active in the area of opera: he could be heard amongst others as Figaro, Don Giovanni and Papageno and performed as Don Febeo from Simon Mayrs “Che Originali” at the City Theatre of Ingolstadt and on a CD production. In 2007, he sung the title role in Monteverdi’s “Orfeo” at the Opera Festival in the “Stiftsruine”Bad Hersfeld, with huge success. Next to his work as opera singer, he directs an ensemble for children’s operas with a wide range of production, e.g. in Bavaria, Hesse and Thuringia. An essential part of Gropper’s work is formed by paedagogy and choir work; he was the vocal instructor of the Munich Bach-Choir and the Munich Motet-Choir, taught at a renowned actor school in Munich for 10 years and has been teaching at the Music Academy of Munich since 1997. In 2001, he was appointed Professor for singing, linguistic education and vocal didactics. He is frequently an instructor at training courses and workshops on choir and vocal work.

Since 2005, he directs the chamber choir “Arcis-Vocalists Munich”, with which he performs a capella and oratio literature and undertakes numerous concert tours. The ensemble sang e.g. Mozart’s Requiem, Bach’s Mass in H Minor and Christmas Oratio, as well as Mendelssohn’s Elias; in May 2010 and March 2012, BR productions with Bach cantatas followed, as well as scenic productions in 2009, 2011 and 2013 (Bach – Johannespassion, Monteverdi – Orfeo, Haendel – Saul). Thomas Gropper conducted (amongst others) the Vogtland Philharmonics, the Philharmonic Orchestra Bad Reichenhall and the Baroque Ensemble La Banda and L’arpa festante, e.g. in the Herkulessaal and the Prinzregenten Theatre Munich,  but also in the Brunnenhof of the Residenz. The Arcis-Vocalists are frequent guests at renowned Events, such as the Lake Constance Festival, the Bad Hersfeld Festival, the European Week in Passau, the Bach Days Hesse-Thuringia and the Summer between Inn and Salzach. In Automn 2008, he became artistic director of the renowned Philharmonic Choir Fuerstenfeld, with which he performed Haendel’s “Samson” and Mendelssohn’s “Paulus” in 2010, Haydn’s “Seasons” in 2011, and Mozart’s Mass in C Minor in 2012, among others. At the same time, Thomas Gropper helps choirs to prepare for renowned Events, e.g. in spring 2011 the “Lord of the Rings” Events with film and live music.