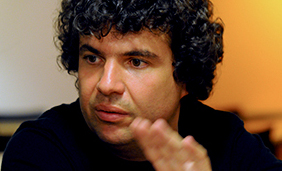 The conductor and pianist Dorian Keilhack was born into a family of musicians, which has roots in Germany, Austria, Bohemia and Israel.

After studying conducting and piano at the Universities of Nuremberg, Freiburg and the famous Juilliard School in New York (teachers among many were Werner Andreas Albert, Otto Werner Müller and Ulrich Weder), he got further musical impulses from Leon Fleisher, Christoph Eschenbach and Georg Schmöhe.

After winning a variety of prizes at international piano competitions, Keilhack started his career as a pianist, which led him through Europe, as well as through South and North America. As a soloist he played with orchestras like the Gewandhaus Leipzig, the MDR Radio Symphony, the BBC Welsh Symphony, and the Krakow Philharmonic, the Jenaer Philharmonic, or the Dortmund Philharmonic.

Between 1998 and 1999, Dorian Keilhack was a coach at the State Theatre of Nuremberg. In autumn 1999, the artistic director Brigitte Fassbaender and the music director Georg Schmöhe offered him an employment as coach, conductor (“Kapellmeister”) and assistant of the music director, . There, he conducted various operas, operettas and musicals. Being especially interested in New Music, he co-produced a lot of contempory operas, directed numerous debut performances and travelled to Salzburg and Vienna in order to conduct different productions.

In 2003, he was elected by the Tirol Ensemble to become their new music director. He and his ensemble were heard in Austria and abroad in over 50 concerts with works from the 20th and 21st century. The Augenspieltheater Hall invited him and his ensemble to perform Oedipus Rex by Stravinsky, for which they received the prize “Best Opera Productionof the Year on a Free Stage” from the Austrian Ministry for Culture.

In 2008, he became first “Kapellmeister” at the City Theatre of Bern, Switzerland. In the same year he made his debut at the Zürich Festspiele with the orchestra “Collegium Novum Zürich”.

Since 2001, he has been conducting different orchestras like Regensburg, Lübeck, Mannheim, Schwerin, Meiningen, Bonn and Würzburg Philharmonic.

In 2009 he conducted the Würzburg Orchestra during the International Mozart Festival in Würzburg. In May 2010, he made his debut with the “Niederschlesisches Staatsorchester” in Jelenia Gora, Poland. The same year, a CD with Dorian Keilhack conducting “Der göttliche Tivoli” by Per Norgard was released.

Since 2000 Dorian Kolchak has been giving master classes for young singers and musicians, and also teaches at the summer programme of the Miami Frost University .