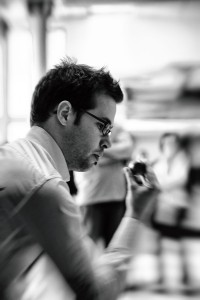 Christian Miglioranza started his career with Gianmaria Romanenghi at the “Claudio Monteverdi” conservatory in Bolzano, where he graduated with distinction in 2007. In the years 2006 and 2007 Christian attended the “Soncino Percussion Academy”, and was then a student of David Searcy, Jonathan Scully, Mike Quinn and Christiano Pirola at the “Accademia Internazionale di Musica Classica” in Milan.
In 2008 he became a member of the “Gustav Mahler Youth Orchestra” and had the privilege to play with the renowned conductors Sir C. Davis and H. Blomstedt.

From 2010-2012 he appeared regularly in the “Filarmonica della Scala” orchestra and the “Orchestra del Teatro alla Scala” under the direction of famous conductors such as Chailly, Barenboim, Gergiev, Bychkov, Gatti, Harding and others and since 2011 he’s working regularly as a percussionist with the Mahler Chamber Orchestra.