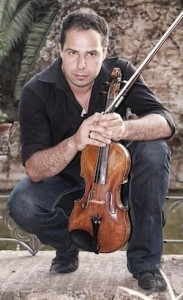 Anar was born into a musical family in Baku in 1981 . At the age of five he started to play the violin with his father. Within a year, he played his first solo piece with the Azerbaijan State Philharmonic, and by the age of ten he had his first recital.

In 1998 Anar was accepted at the Baku Music Academy. One of the most important moments of his student life was in August 2002, when Paganini’s violin ”Sivori” was brought to Azerbaijan specially for Anar to play during a concert to honour his talent. After his soloist diploma, he continued his studies in 2002 at the Folkwang University in Essen and joined the classes of Prof. M. Mintchev and Nana Jashvili, which he successfully passed in 2008.

Anar Ibrahimov is one of the bext violinists in the entire history of Azerbaijan. Since his childhood, Anar has been giving concerts nationally and internationally as a soloist and as a member of numerous chamber ensembles and orchestras. He regularly gave concerts together with Gidon Kremer and his chamber orchestra “Kremerate Baltica”, of which he is still a member. In 2006, Anar received the “Hector Berlioz” medal of the Hector Berlioz National Association in Paris. In 2008, he was filmed for TV productions together with the Bavarian Rundfunk Orchestra. In 2010, he won the concert master position in the South Westphalia Philharmonic Orchestra. Anar also gives a lot of solo and chamber music concerts and has taken part in some of the world’s most famous festivals like Lockenhaus, Verbier, Basel, Kuhmo and Kromberg.